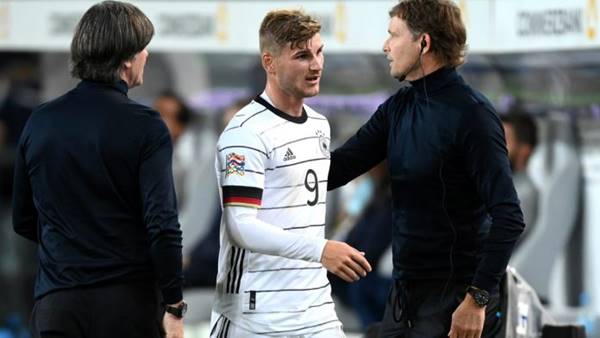 Werner had Germany on track for victory in Stuttgart on Thursday, but Jose Gaya snatched a 95th-minute equaliser for Spain in Group 4 of League A.

Chelsea star Werner, who is preparing for his first season at Stamford Bridge after arriving from RB Leipzig, crowned a wonderful team move in the 51st minute.

However, Spain debutant Ferran Torres got to the right byline and Gaya smuggled home a finish from Rodrigo Moreno’s header down at the death.

“It’s annoying because we put so much into the match, we worked so hard,” Werner said post-match.

“After the goal we allowed ourselves to get pegged back a little too much.”

The result left Germany still searching for their first Nations League victory after drawing two and losing two in the inaugural edition of the tournament in 2018-19.

Germany head coach Joachim Low added: “I am satisfied with what I saw. Our boys gave it their all right to the end.

“It was an intense and hard-fought match – both teams put a lot into the match.

“For me, it was important not to let Spain play and in my opinion we had the better chances. In the second half it was tough to keep the pressure up.”

Atalanta star Robin Gosens also made his debut for Germany, setting up Werner’s goal, and he told UEFA.com: “It was a very special night, my first cap. Playing in a back three as I am used to from Atalanta makes it easier for me.

“My part is covering the entire left flank and I am pleased with the way we played as a team and the part I played.”