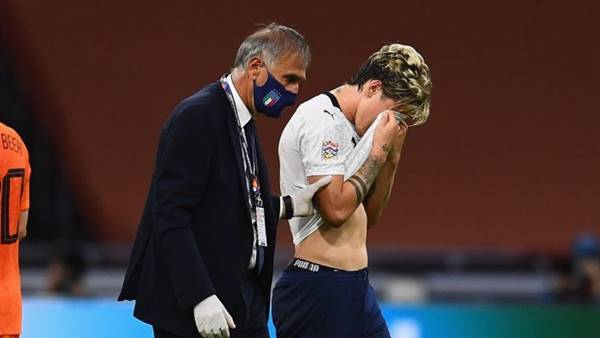 
Roma and Italy midfielder Nicolo Zaniolo has suffered a torn anterior cruciate ligament (ACL) and will undergo surgery on Wednesday.

Zaniolo limped from the pitch in obvious discomfort after an innocuous collision with Donny van de Beek in Italy’s 1-0 win over the Netherlands in Amsterdam on Monday.

The 21-year-old had only recently recovered from surgery on an ACL tear sustained in January, making eight appearances for Roma in the closing weeks of the prolonged Serie A season.

Italy doctor Andrea Ferretti feared the player had suffered “major” damage to his left knee – not the one he injured previously.

And on Tuesday his club confirmed those fears.

“Nicolo Zaniolo will undergo surgery on Wednesday after MRI scans today confirmed the player has suffered a complete tear to the anterior cruciate ligament of his left knee,” the Serie A outfit tweeted.

“The 21-year-old suffered the injury while playing for Italy against the Netherlands on Monday evening.”

This latest setback will likely leave Zaniolo sidelined for the remainder of 2020, with a February return seemingly the best-case scenario.